Home  > resources > blog > How to Find and Stop Air Leaks 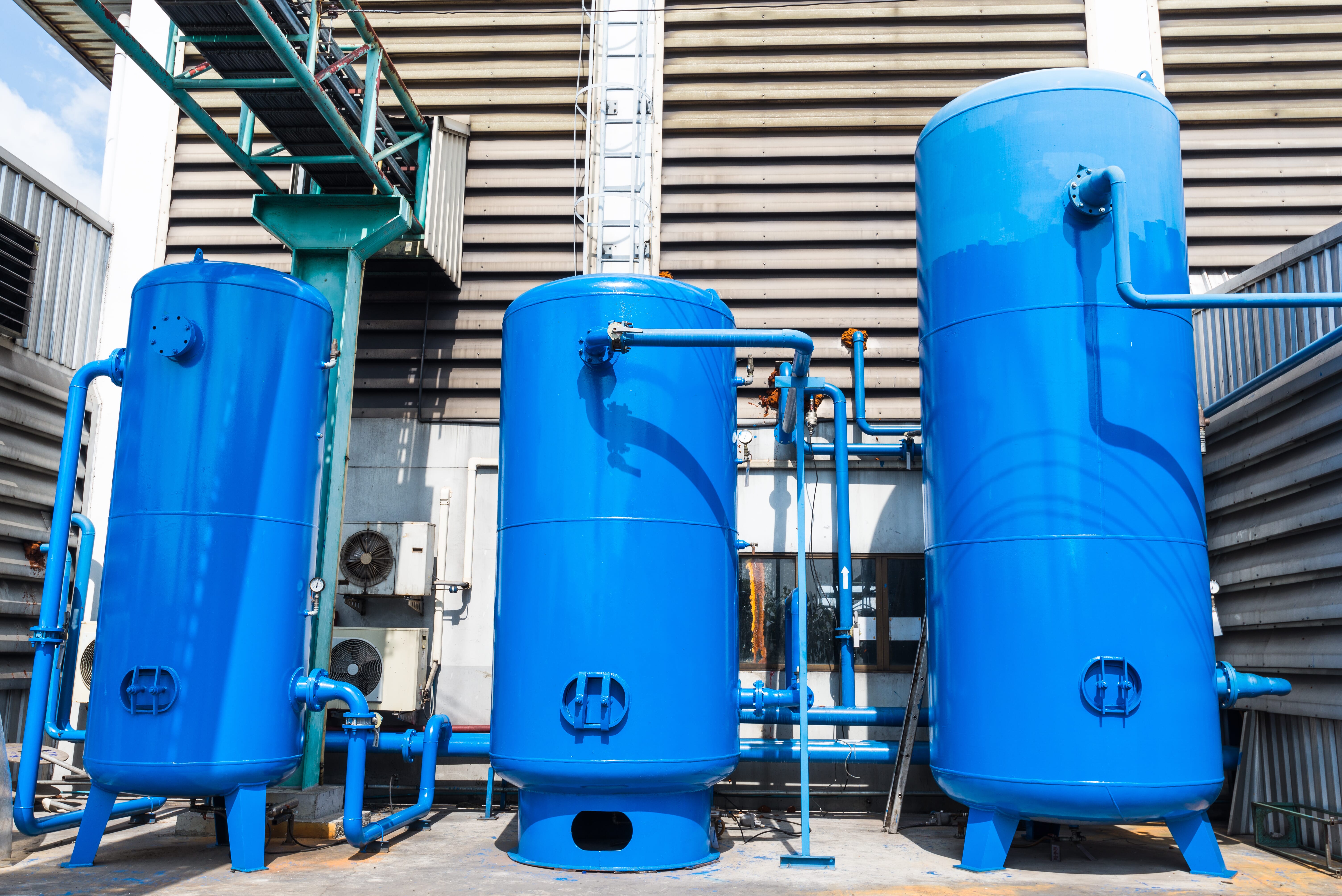 Leaks in your air compressor system can result in losses of 30% to 50% of your compressed air volume.

Leaks of pressurized air are a constant concern in air compressor systems. They rob your systems of power, energy and productivity, demanding regular attention.

The statistics cited by a variety of sources support this claim:

Worst of all, people employ a variety of temporary fixes or workarounds to deal with leaks in their compressed air systems. Some simply make the problems worse.

So let’s review some of the common causes of leaks. We’ll start with the sources of leaks, but spend most of our time on leaks that increase the energy costs of your compressed air system.

Even more than oil leaks, you can have compressed air system leaking air in a variety of locations:

There can be a number of reasons why these leaks occur. The system can be installed improperly. There can be poor sealing or materials. Pipes, valves, fittings or connectors can be damaged by accidents or misuse. And workers can make mistakes, bypassing a drain or increasing pressure in an attempt to increase volume in the far reaches of your compressed air system. Let’s not forget, too, there’s always normal wear and tear.

How to Find Leaks

Many times, it’s not hard to find compressed air leaks. The notorious hissing sound gives away the location.

But that won’t work for all leaks: 80% of leaks are inaudible. So we need other means to find and fix compressed air system leaks.

Start by determining if you have a leaking problem. The quick way to find out is by putting your entire system under normal operating pressure while it’s in a zero-demand posture, like overnight, especially if you have a reduced workforce on the third shift. Simply measure the pressure before and after your test, and you’ll know if you have any compressed air leakage.

If you’d like to do the math, go to our Leak Estimator page and plug the figures directly into the formula. 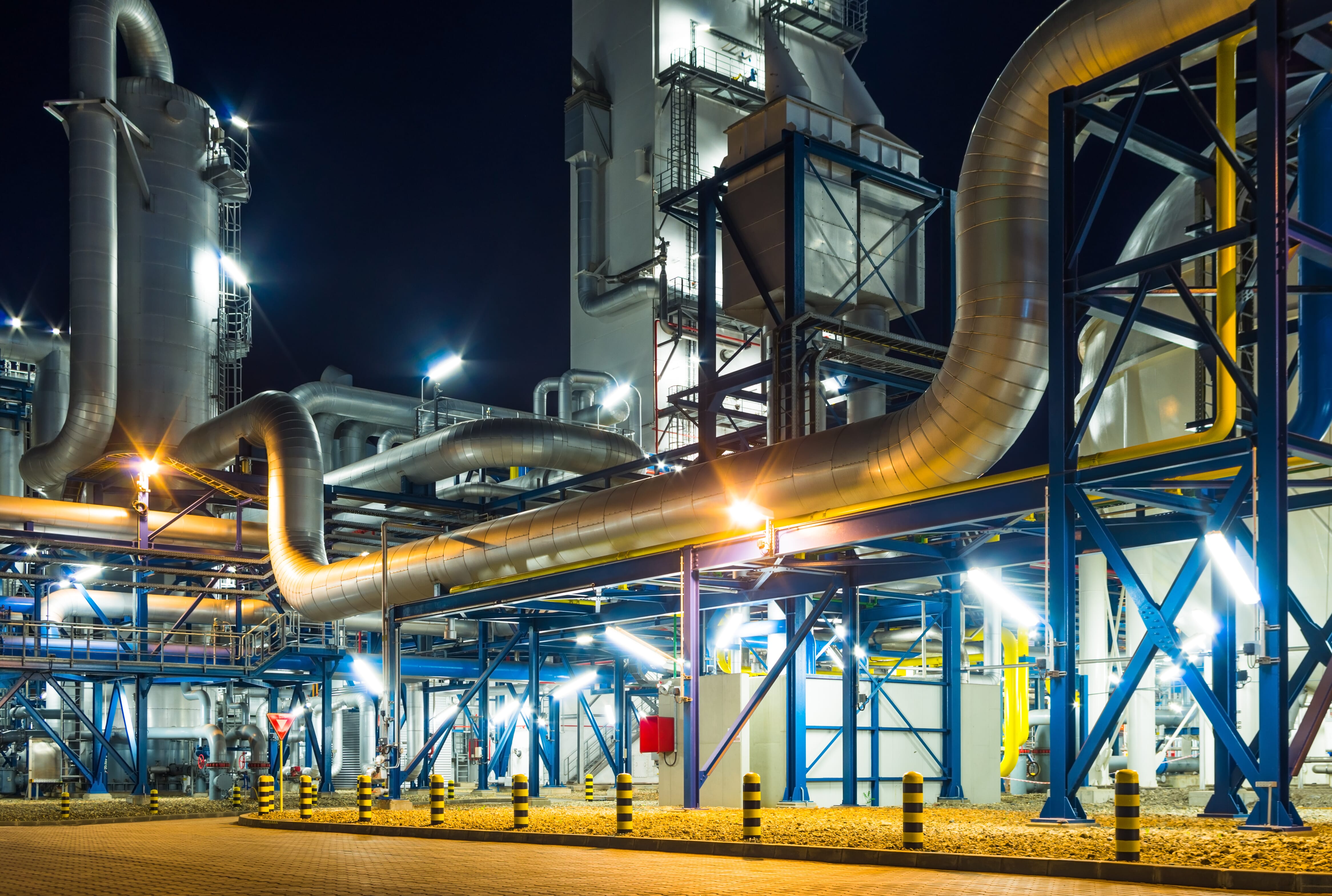 To determine if you have leakage in your compressed air system, measure the pressure change while your system is in a zero-demand condition, like overnight.

We also suggest that you walk the path of the airflow when the system is pressurized, but not in operation. Like before your operation starts up for the day.

Most often, it’s simply a matter of repairing or replacing worn valves, fittings or connectors. During our walk-throughs, we simply take corrective action on the spot, if the fix is no more than tightening a connection.

But sometimes, the fix is more involved. In those cases, we simply tag them for maintenance follow-up and move on.

One thing you don’t want to do is disturb a connection or a fastener while it is under pressure. That could lead to serious injury or death.

Handheld leak detectors are a huge advance, using technology to locate leaks the human ear cannot detect. As noted, you won’t be able to hear the vast majority of leaks. The problem is compounded by the ambient noise in most industrial facilities.

Leak detection devices emit a sound that increases in proportion to the strength of the signal, almost like a Geiger counter. You can thus locate a leak simply by zeroing on the leak and moving closer to it.

Newer, visual acoustic imaging devices go even further. They have video capabilities and use multiple directional microphones to triangulate the position of the source even closer. And they overlay those signals almost like a “heat map” on the video in front of you. The technology also estimates the leak volume and can literally print out a picture pinpointing the leak. 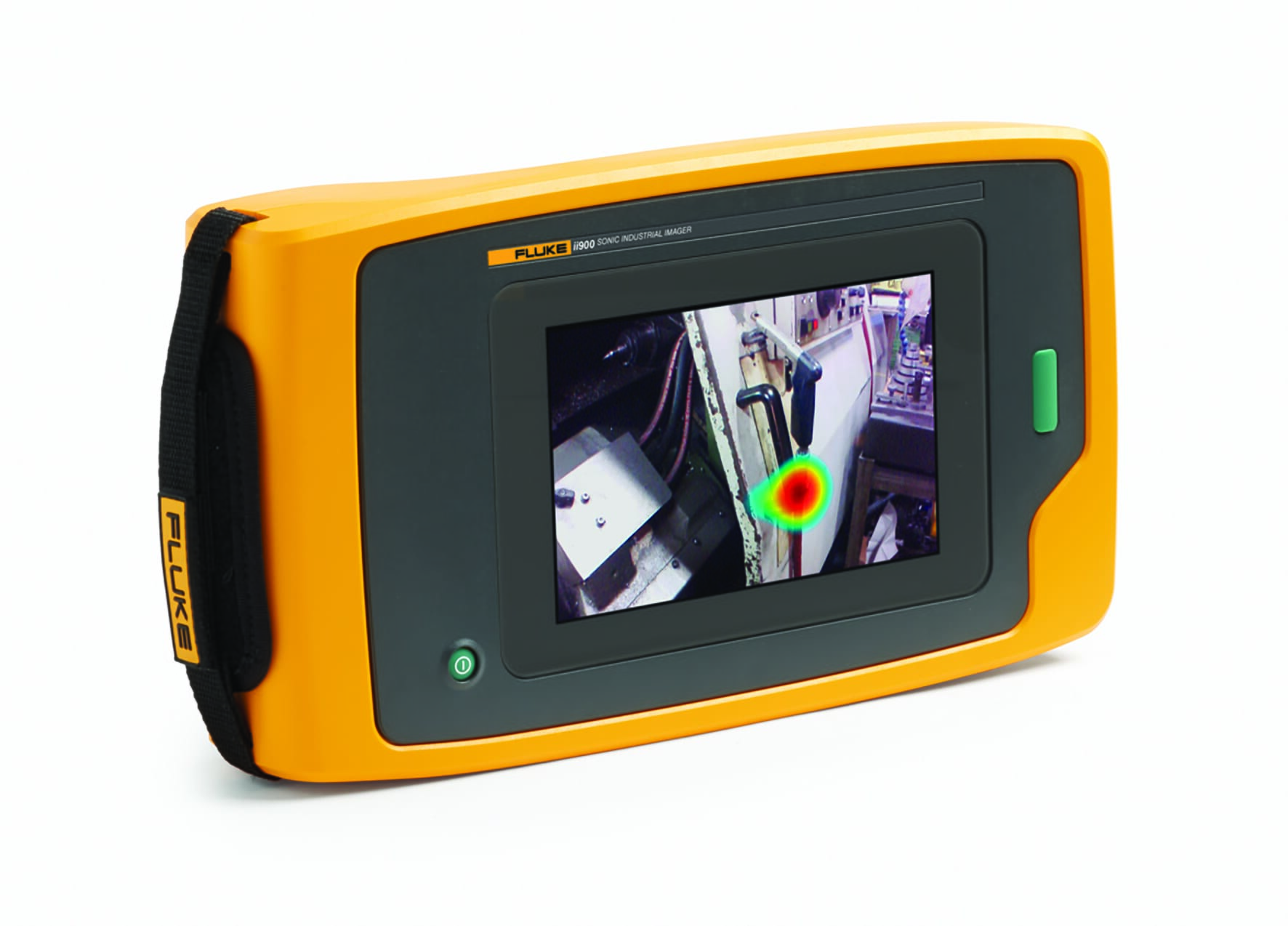 Ultrasonic leak detection can help you pinpoint sources of leaks in your compressed air system, like this illustration of the Fluke ii900 Industrial Acoustic Imager.

As a result, you not only know that a leak is in a pipe 30-foot above the plant floor, but you also get a good sense of whether it’s worth worrying about. Specifically, will it be worth the trouble to put up scaffolding or bring in a scissors lift to get close enough to remedy the problem?

And, by pinpointing the source specifically, the newer models avoid some of the problems associated with handhelds, which can pick up noise from other compressed air devices in an area where you’re looking for leaks. Handheld tools, for instance, or signals from other ultrasonic emitters like cathode ray tubes, fan blades, pumps and vacuum pick-ups. Another good example: because they use multiple directional microphones, the new technologies make it less likely a technician would be deceived by signals reflecting off a wall or other flat surface, as they might with a handheld.

An added bonus: these new ultrasonic devices can detect leaks in industrial gas lines or vacuum or steam pipes. Even electrical discharges. And while this may seem to be beyond the scope of an air compressor system audit, those discoveries have saved companies tens of thousands of dollars. Not to mention eliminating health hazards associated with exposure to some of those substances, like welding gasses. And, in that way, add both value and urgency to the effort.

Even technology, of course, has its limitations. There’s still nothing that replaces good management of your maintenance resources. Walk-throughs, inspections, that kind of thing.

Even simply not taking your air compression system for granted. And, most of all, avoiding the temptation to simply crank up the system pressure when a remote user reports they’re not getting enough pressure. Those kinds of “quick fixes” usually result in even more leaks and less pressure downstream. 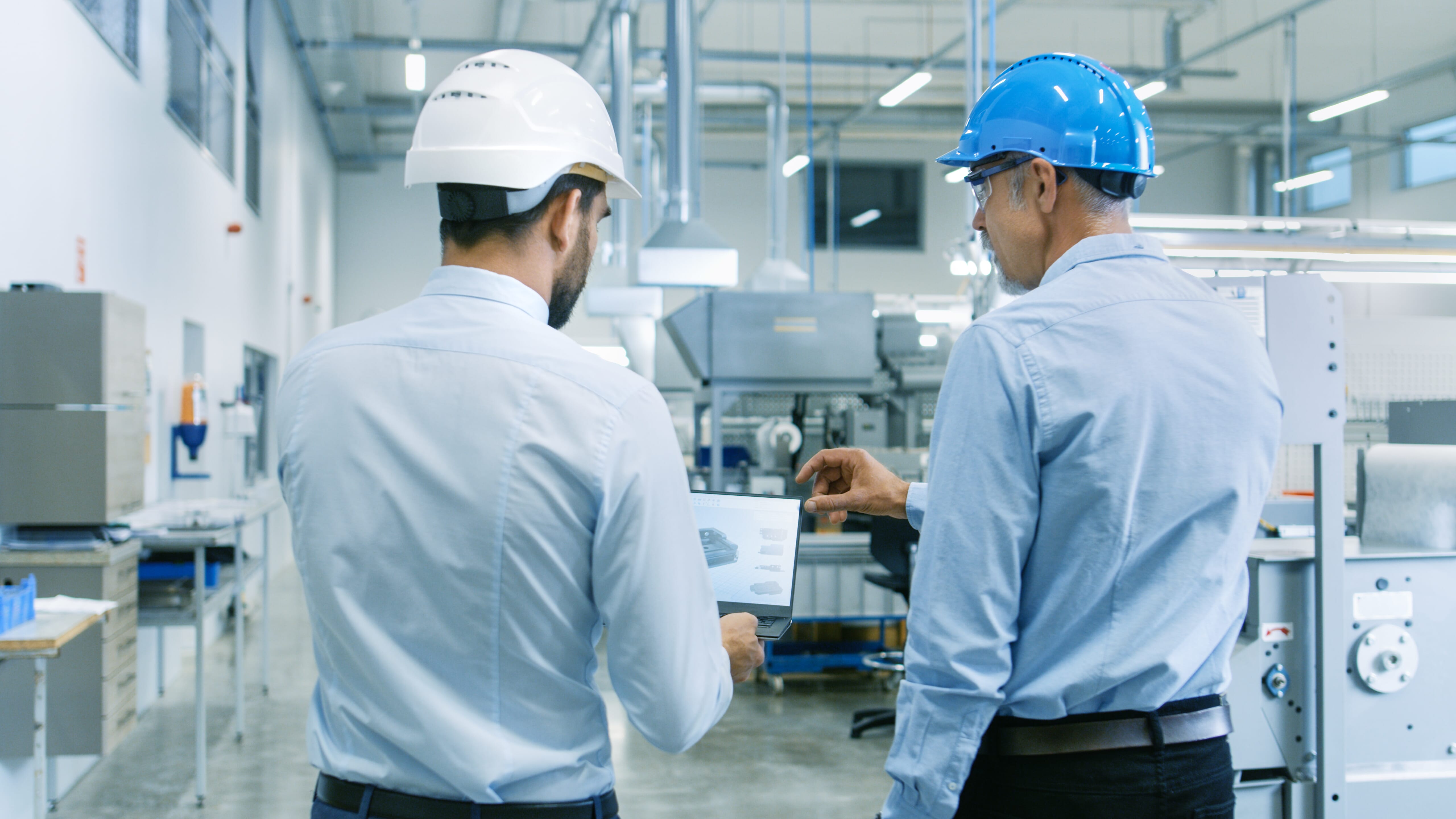 Doing regular walk-throughs with a maintenance professional can help you turn your air compressor system into a competitive advantage.

For some of our customers, maintenance of their air compressor system has almost become a competitive advantage. After all, reducing compressed air loss from the normal 40% to 50% range to 20% or less can easily save them tens of thousands of dollars annually in energy costs. That certainly gives them a leg up on competitors who are tracking compressed air waste of 50% or more.

Admittedly, ultrasonic leak detection devices are beyond the scope of most air compressor maintenance teams. That’s why it’s so important to have a relationship with an air compressor system maintenance professional.  Someone who has the most up-to-date equipment and a lot of experience in using it to identify and quantify compressed air leaks.

Most important, bring in a professional anytime you see a drop in performance you just can’t explain. Some companies are finding that they no longer have that kind of expertise in-house. And few have the resources to purchase the latest technology or the need to train staff in its use. As a result, we strongly advise our customers to seek outside help when problems arise.

Kaishan USA works with a nationwide network of independent distributors, who can provide on-site help and consultation as needed. These factory-trained air compression experts have an investment in their local communities and can service your air compressor system without a problem. And they have staff members who are skilled in using leak-detection technology on a daily basis.

Whether you establish a formal maintenance contract or simply an informal, handshake agreement, you will benefit from having a compressed air professional available. It may take the form of a monthly walk-through of your plant or a regular series of inspections. But you and your company will benefit from having a relationship you can count on, both in the short term and in the long term.

Stopping leaks in your rotary screw air compressor is absolutely critical to the operation, not only of your compressed air system, but also of all the processes that rely on that system. If you need help setting up a leak monitoring and prevention program, get in touch with the experts at Kaishan. Contact us today.

Leaks in your air compressor system can result in losses of 30% to 50% of your compressed air volume.